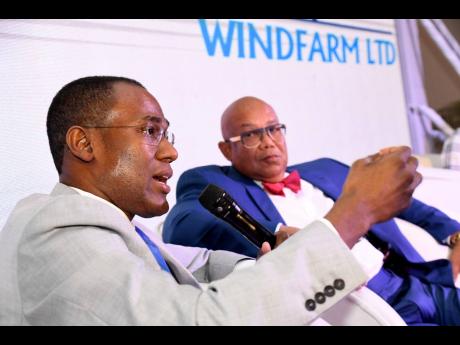 KINGSTON, Jamaica — The Wigton Windfarm (WWF) initial public offering (IPO) on the Jamaica Stock Exchange (JSE) is expected to be listed in March 2019. General Manager of Public-Private Partnerships and Privatisation Services at the Development Bank of Jamaica (DBJ), Denise Arana, noted that the process is progressing smoothly and IPO activities will commence once the JN Fund Managers (JNFM) Limited debt refinancing process is completed.

JNFM, a licensed securities dealer and full service investment manager, was chosen through a request for proposal process offered by the DBJ to assist Wigton to refinance its Petrocaribe loan.

“The refinancing is an important initial step that will restructure the balance sheet of the Wigton Windfarm to manage the foreign exchange risk it has now.

I think this initial step will be very important in positioning Wigton as a very successful transaction,” she said.

Arana added that the terms of the offer are not yet finalised “so we're still in that process of determining what that optimal (IPO) offer is that will maximize the value for Government as shareholder”.

She was speaking to JIS News following a tour of the WWF in Rose Hill, South Manchester, on Friday. The tour included teams from the DBJ and JNFM.

A subsidiary of the Petroleum Corporation of Jamaica (PCJ), WWF is the largest wind energy facility in the English-speaking Caribbean and was built by the Government to help diversify Jamaica's energy mix.

The company began operating in 2004 with the commissioning of a 20.7 megawatt-generating plant, Wigton I.

This was followed by the development of Wigton II in 2010, which generates 18 megawatts of energy.

Wigton III, the 24-megawatt expansion of the facility, was officially commissioned into service in June 2016 by Prime Minister Andrew Holness.

Once listed on the JSE, Wigton will be the second energy-related company on the market. Arana indicated that Jamaicans will have an opportunity to purchase shares in the company once it becomes listed.

Deputy General Manager of JNFM Limited, Jermaine Deans, in his remarks said the refinancing process is important to the IPO.

Through that process, approximately $7 billion (US$52 million) will be refinanced through a series of senior secured bonds which will be supported by a debenture setting out a floating charge over all fixed and floating assets belonging to Wigton.

The refinancing will allow the funds to be repaid to the Petrocaribe Development Fund to be redeployed to other areas for growth inducement.

“We're interested in renewable energy, it is something that we started looking at about a year and a half ago and we're doing this with Wigton.

We also currently have the MPC Clean Energy Fund IPO in the market space (which) is also in the renewable energy and this is in Jamaica, Costa Rica and there are going to be some other projects across Latin America and the Caribbean.

We see it (renewable energy) as the way to go,” he said.

“The United States and Europe have already gone that way quite a bit and the Caribbean is somewhat lagging and we're catching up,” he continued.

Now you can read the Jamaica Observer ePaper anytime, anywhere.

The Jamaica Observer ePaper is available to you at home or at work, and is the same edition as the printed copy available at http://bit.ly/epaperlive