Creativity does not wear suits. Money wears suits. Creativity wears… well, nothing really… for the whole essence of being creative is simply being what one is – without anything covering, masking, filtering, or imaging that raw, natural, and unadulterated creativity.

It’s a happy day when creative people get together to pool their unique talents into a great idea they set out to share with the world.

But it’s a sad day when money bags join the team. Where the conference table used to be circled by just a bunch of idealists in T-shirts and flip-flops, in walks a finely made suit dropping a fantastically heavy briefcase on the table with a spine-jerking thud.

Once he’s captured everyone’s attention, he drops an even heavier bombshell, “There are going to be some changes made around here.”

It would seem Etsy.com – an 8-year old e-commerce website where creative people can sell their unique handmade creations to the general public – has been going through just such a transformation. Seeing that flower-power hippie VW van being painted-over and re-detailed seems to indicate the company is being prepped for sale on the stock market.

Though management has not confirmed it, Etsy may be readying itself for an IPO in 2014. After all, we do live in a material world, and even idealists have bills to pay.

Etsy was founded as a marketing platform where artists and artisans of original handmade crafts could open a virtual storefront and offer their creations to the world.

It was an eBay with a difference… a focus on handmade or vintage items older than 20 years, including personally crafted ceramics, clothing, quilts, jewelry, candles, bath and beauty products, art, toys, home-grown foods and food ingredients, and supplies needed to make arts and crafts, such as paper, beads, paints, and tools.

After spending two to three months building the site, founders Robert Kalin, Chris Maguire, and Haim Schoppik opened for business in 2005 out of a small office in Brooklyn, New York.

The site’s comprehensive listing and search capabilities, together with the use of Adobe Flash for more attractive presentations, rapidly grew a loyal membership among sellers and users alike, reaching 1 million sales transactions and worth over $1.7 million in just two years.

But unlike the products sold through their site, profit was not something they could simply create.

Enter the suits with their briefcases carrying $27 million worth of investment in 2008, led by Union Square Ventures, Hubert Burda Media, and Jim Breyer.

That sorely needed injection of cash accelerated the company’s growth by leaps and bounds, transacting over $10 million worth of vendor merchandise sales per month by 2009, $300 million in all of 2010, and $900 million in 2012. By the middle of 2013, Etsy’s membership base has grown to over 30 million users in some 200 countries, CEO Chad Dickerson then blogged.

Yet despite such success, idealism continued flowing through the company, moving it to apply for B-Corporation certification, which it received in 2012.

Where a normal corporation’s primary obligation is to uphold its shareholders’ interests, a Benefit Corporation takes on an added purpose “to create a material positive impact on society and the environment,” defines the Benefit Corp Information Center.

As the company outlined its philosophy on its website, “We are inspired by this movement that overwhelmingly proves the feasible harmony of business interests with social and environmental responsibility.

And it wasn’t just the company’s management that pushed for B-Corporation certification, as its suited-up investors also supported the idea.

As Albert Wenger of Union Square Ventures, a longtime Etsy investor and advisor, expressed on the company’s site, “We believe that the best long-term stewards of Internet-based networks and marketplaces will focus on value creation for all participants instead of solely on shareholders. B-Corporations provide a legal foundation perfectly supporting this much more comprehensive outlook.”

Such a voluntary step on the part of both the company’s management and its investors is rare and commendable.

The Compromises of Adulthood

Yet generating profit is still the name of the game and main priority.

Etsy’s investors didn’t simply donate their $27 million investment in 2008 and subsequent $40 million infusion in 2012 to charitable causes. They have long seen the potential in Etsy to take some business away from eBay (NASDAQ: EBAY) and Amazon (NASDAQ: AMZN).

And of course, the potential for a killing on the stock market through an IPO. If they could just tweak operations a little here and a little there, they’d be in for a very tidy return on their money.

Enter compromise. If you want to make it on Wall Street, you need to go big. 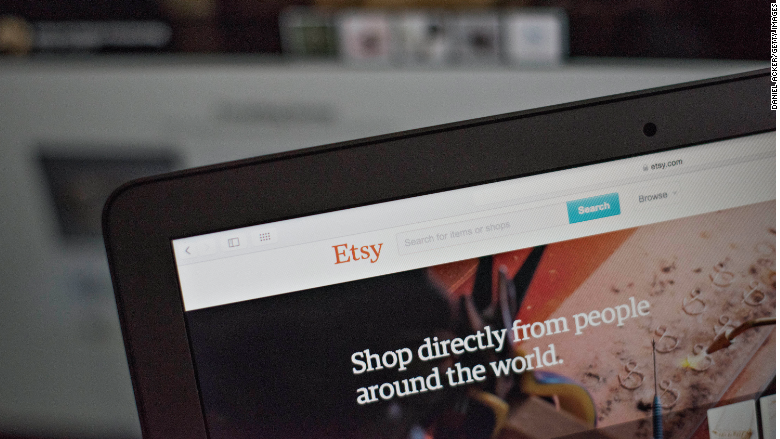 Etsy would have to find ways of expanding its catalogue of items, or it would never successfully compete with eBay or Amazon. This meant having to turn its back on the one unique feature that set it apart for other Internet marketplaces – the handmade criterion.

Etsy would now open its site to vendors selling other producers’ goods, and in so doing, Etsy ceased to be Etsy.

“Sellers will now have the option to hire additional employees and work with outside manufacturers, as long as they list the information on their About page,” Business Insider informed its readers last month. 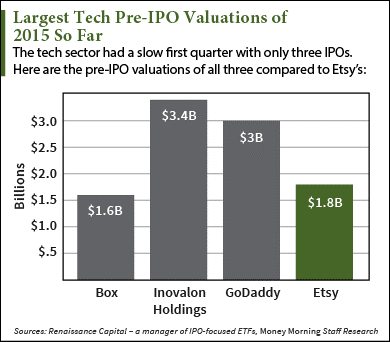 “Many sellers expressed concern about their single-person operations having to compete with businesses that use factory manufacturing,” the report explained.

But CEO Dickerson does have a job to do, and the investors who have already sunk more than $91 million over 8 years must get paid, or no one in the company from its 450 employees to its 1 million sellers would get paid; it’s just that simple.

“Dickerson tried to quell concern by insisting that the changes would bring more buyers to the site, which would ultimately lead to more success for all sellers,” the report underscored the motivation behind the expansion of the business model.

Join Wealth Daily today for FREE. We'll keep you on top of all the hottest investment ideas before they hit Wall Street.

Become a member today, and get our latest free report: "How to Make Your Fortune in Stocks"

It contains full details on why dividends are an amazing tool for growing your wealth.

An IPO Available Directly to You

It certainly looks like Etsy is being prepped for an IPO, although Dickerson insists no such plans are imminent, nor have ever been discussed.

One possible reason for delaying a public offering is its still undeveloped mobile venue. “We need to figure out the best way to get people to buy on mobile,” Business Insider cites Dickerson. “That requires experimentation.”

That’s a bad word on Wall Street – experimentation – as there are a lot of hang-ups that come with rolling out a brand new technology.

One such preparatory touch-up was to create a CFO position for the first time in its 8 years of operation, hiring Kristina Salen to the office earlier this year.

Her seven years of prior experience at Fidelity Investments’ media, internet and telco group is certainly something that a company preparing to go public would greatly benefit from.

When the company eventually does go public – and it will, despite the absence of confirmation – it might be something for investors to look for with interest. It could very well be one of the rarest IPOs, one in which public investors can actually get in at the ground floor price instead of having to settle for the already-too-late over-inflated price during regular market trading.

We know the story – an IPO is priced in the mid $20s the night before, and opens in the $30s and $40s the next day, with public investors getting absolutely no benefit from the pop in price. The suits took it all.

Dickerson, though, is already thinking about doing it differently, intending to give his website community’s members first pickings at its stock, even citing the Boston Beer (NYSE: SAM) IPO of late 2000, in which the company’s customers had first dibs on the new shares before Wall Street did.

For someone who claims that an IPO has not even been discussed, Dickerson sure seems to have put a lot of thought into it.

If you liked this article, you may also enjoy:

In each issue, you'll get our best investment research, designed to help you build a lifetime of wealth, minus the risk. Plus, by signing up, you'll instantly receive our new report: Surviving the Coming Economic Collapse.

Investing in an IPO ETF

Why would it unload this revenue stream?

Groupon's (NASDAQ: GRPN) IPO was a well-publicized flop. Will LivingSocial take heed, or will the digital coupon company go public as well?

China's e-commerce giant Alibaba may forego its Hong Kong listing for a NASDAQ listing instead...