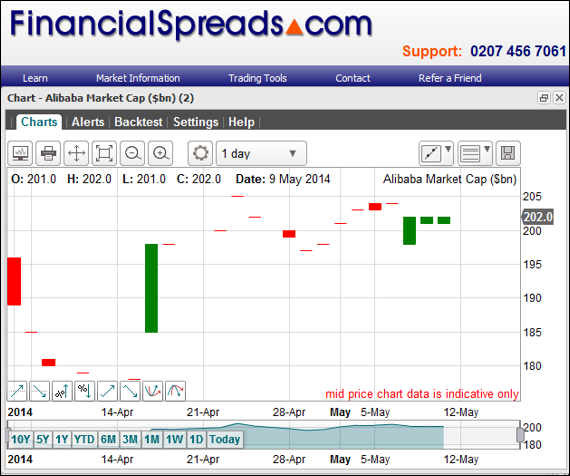 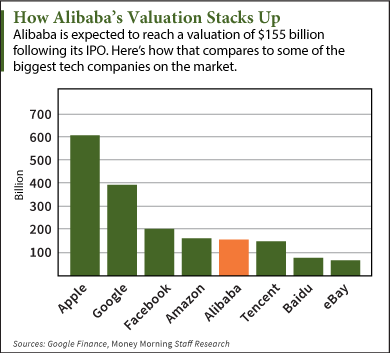 Due to strong investor demand, underwriters exercised an option to release 48 million additional shares bringing the IPO to $25 billion — the largest in history.

At these prices levels, Alibaba’s market capitalization is already larger than blue chips like IBM, Oracle, Bank of America and Coca-Cola.

The e-commerce giant already processes more volume of merchandise than Amazon and eBay combined. Alibaba’s network of sites like Taobao, Tmall, Alipay and Alibaba.com dominates 80% of e-commerce in China as the country’s middle class and Internet usage continues to grow.

Despite its size, Alibaba is still growing at breakneck pace — revenue in the first quarter this year grew 38% year-on-year and the second quarter grew 46% year-on-year.

One company that’s benefiting from Alibaba’s historic IPO is Yahoo which owned 22.6% of Alibaba pre-IPO.

In a regulatory filing, Yahoo sold 140 million shares in the IPO netting itself $9.4 billion in cash.

We talked about Yahoo and the Alibaba IPO on radio back in April and June as we discussed how Yahoo’s stake in Alibaba was a way to invest in Alibaba pre-IPO.

Yahoo stock has returned 158% in two years leading up to Alibaba’s IPO.

We’ll be sharing a case study on our analysis and investment in Yahoo soon, while Investment Quadrant members will receive a video case study as well.

Do watch out for that!

In 2010, he appeared on U.S. national television on the morning show The Balancing Act. 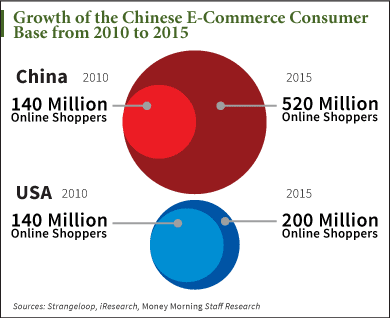 An avid investor himself, Adam shares his personal thoughts and opinions as he journals his investing journey online.

How to make a living in cryptocurrencies