How The Market Moves Forex

How often do you see big moves in the market like we have seen recently, but you never find yourself profiting much from them?

How often do you close a trade out prematurely just because it’s gone against you a bit and you ‘freaked out’ because you thought it would result in a bigger loss?

Making ‘fast money’ and building a small account into a large one, aren’t things that just ‘happen’ to successful traders.

As any consistently profitable trader will admit, it takes a consistent conscious effort to hit big winners in the market. The inevitable retracements and ‘whip saws’ that hit a market are events that shake out most amateur and inexperienced traders. The mental discipline required to simply ‘do nothing’ after you enter a trade, and instead let the market do the ‘work’, is something that not many traders possess. It’s not acquired overnight, but it is something that you can develop and grow over time.

The psychology of holding a trade

A simple fact of trading, is that if you want to make a lot of money, you’ve got to have the mental fortitude to hold trades for longer than you might be comfortable with.

The irony of trading is that to make money ‘fast’ and build your account up, you’ve got to have patience, and to be clear, I’m not talking about your average daily-life type of ‘patience’.

What I’m talking about here is an iron-clad, bullet-proof, bad-ass type of patience that 90 to 95% of the world’s population simply doesn’t possess.

Think about this for a minute…

Most traders do very well on a demo account before they go live.

Think back to when you were on demo, or maybe you’re on demo right now. I’m willing to bet you’re holding trades for a few days or a few weeks even, and you’re not interfering with them very much.

Maybe you’ve even entered a demo trade and not checked it for a week because you were too busy at work, then when you did check it again you were up 20 or 30%, this is not uncommon.

On a demo account, traders tend to be less-involved with their trades because they simply don’t care that much since there’s no real money on the line.

The end result, is that they stick with their original trade idea most of the time.

This is the main reason why people tend to do very well on a demo account.

Thus, traders often do very well on demo for the reasons just discussed, then they get all psyched up to start trading live and open a live account.

However, what happens most of the time, is that traders become far more involved with their live trading account, simply because there’s now something at stake; real money.

My stocks portfolio & widget with cryptocurrency

This over-involvement leads to the trader changing their mind on trades, jumping in and out of the market with high frequency, second-guessing themselves, and a whole host of other trading mistakes. The end result is that they don’t catch any big moves in the market, and they will eventually probably lose money.

The point is this; the psychology of holding a trade is a very very tricky thing.

To succeed on a live account, you need to do what you did on demo; which is basically just “less”. It’s hard to achieve, since real money is on the line, but if you really want to catch big moves in the market and make big money, you’re going to have figure out a way to ‘sit on your hands’ more often when trading a live account.

The power of ‘doing nothing’

Trading might be the world’s most rigorous test of one’s mental discipline and strength.

The most difficult thing to do in each of these situations is also the most profitable thing to do over the long-run; NOTHING.

Closing out a trade for a small loss, before it hits your stop loss, is an example of letting fear control you, and doing so directly limits your profit potential because you’re not giving the trade proper time to play out and you’re also voluntarily taking a loss.

Closing out a profitable trade too soon can also be detrimental to your overall trading success.

If you have pre-defined your profit target or profit taking / exit strategy before entering the trade, you will only be doing yourself a disservice most of the time by not sticking with that exit strategy.

Remember: Anything you predefine, before entering a trade, is going to be more logical and objective, and thus profitable over the long-run, than any decision you make whilst in a live trade, under the influence of your hard-earned money being at risk.

The POWER of simply sitting on your hands and doing absolutely nothing whilst in a live trade, cannot be over-stated.

Your true power and advantage as a retail trader, lies in your ability to remain patient and in control of your behavior in the market.

Examples of the power of ‘doing nothing’

In the current market environment, trades are taking longer to unfold and this market is designed to shake you out. There is a lot of volatility within the price swings lately.

The chart below shows a couple of recent trades in the spot Gold market.

The first, was a pin bar sell signal that we discussed back in our August 11th commentary. Note that the move lower from this pin bar signal took about two full weeks to play out, and the first week price basically consolidated sideways and drifted higher up the pin bar’s tail. 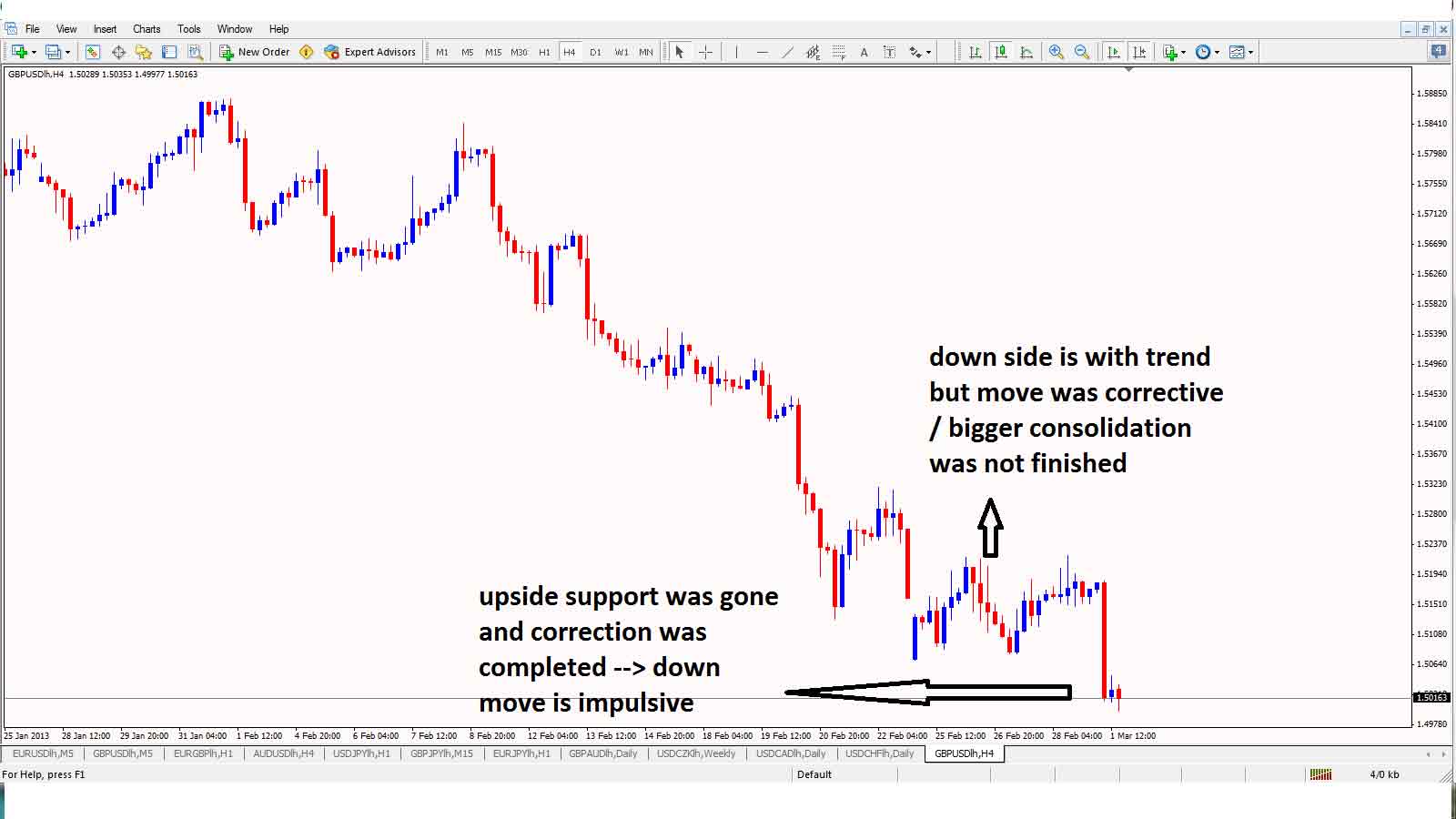 Many traders likely got shaken out during this time and then sat on the sidelines in frustration as price fell dramatically lower over the next 5 to 7 days, without them on board.

The next signal in the Gold chart above was an inside bar sell signal, we first discussed this signal in our members daily trade setups commentary.

That trade did come off pretty easily but we can also see that had you closed it immediately following the big down move on September 2nd, you would have missed about another two weeks of downside movement, which had you just left the trade open, would have racked you up some serious profits. The two trades in the above chart show us a very clear example of the power of simply ‘doing nothing’ after you’ve entered a trade.

The next example we are looking at is a recent fakey pin bar combo trade on the USDCAD daily chart.

Note, we had a clean fakey / pin bar combo signal from a support level, (this was also a 50% retrace level, as we discussed in our original commentary on this trade which you can read here).

The main thing to note here is that price initially popped higher from this signal, triggering many traders into the trade, then over the next two days it began falling again, probably bringing anyone long into negative territory.

However, most traders would have had their stop loss near the low of the fakey / pin bar signal, or just below it, and we can see that price didn’t quite reach that level. It may have been very difficult to hold that trade at the time however, with price retracing back almost to the stop loss point, and many traders likely exited prematurely (before their stop loss was actually hit), just before price rocketed up without them on board.

This is a clear example of why ‘set and forget trading’ is so powerful and how simply sticking with your original trade idea and ‘doing nothing’, is the fastest / easiest way to make money in the market…

In closing, I want you to do something for yourself; STOP guaranteeing your losses.

In other words, give your trades a chance to play out in your favor, stop prematurely closing them before your stop loss is hit, just because you are afraid of absorbing a full loss.

You should always predefined what you’re comfortable with potentially losing on a trade, and just accept that as the cost of doing business in the market.

However, if you cut your trade before your original stop loss gets hit, you’re not letting your trading business have the proper room it needs to grow. Yes, you may avoid some full stop-loss length losses by exiting a trade early, but this will not be the case every time, and so the times it’s not the case, it means you’re going to be taking a loss while also eliminating a potential winning trade, and this is very dangerous and it’s not how you build your account or make money over the long-run.

Therefore, when you cut a potential winning trade out of fear, let’s say that trade would have been a 3R winner, you are voluntarily giving up more than 3R in profit!

(The loss you take, assuming it’s a little less than 1R since you exited prematurely before you stop loss was hit as well as the 3R winner you forfeited).

This is just not the proper way to trade.

Which News Releases Should I Trade?

However, this is how most traders do in fact trade, and it’s also why about 90% of them don’t make money in the long-run.

Here are some tips to help you stick with your original call / trade which will help you catch bigger moves in the market:

If you don’t learn trust to your trade decisions and see them through, you will never make consistent money over the long-run in the market.

Trade a simple method like my price action trading method and stick to a simple trade management plan, which can be as simple as ‘set and forget’.

Chapter 3 – How does the Forex Market move?

About 90% of the time the best decision is to simply let the market do the ‘work’ and let the trade play out with little to no involvement on your part.

Catching big moves in the market, building your trading account from a small one into a big one and becoming a successful long-term trader are all things that can only happen if you are willing to simply ‘do nothing’ most of the time as your trades play out.

So, you need to ask yourself, are you ready to ‘do nothing’, or are you going to over-complicate your trading, over-involve yourself in it and lose money and time as a result?

Nial Fuller is a Professional Trader & Author who is considered ‘The Authority’ on Price Action Trading.

Why price really moves in the forex market and how the bank guys paint the charts.