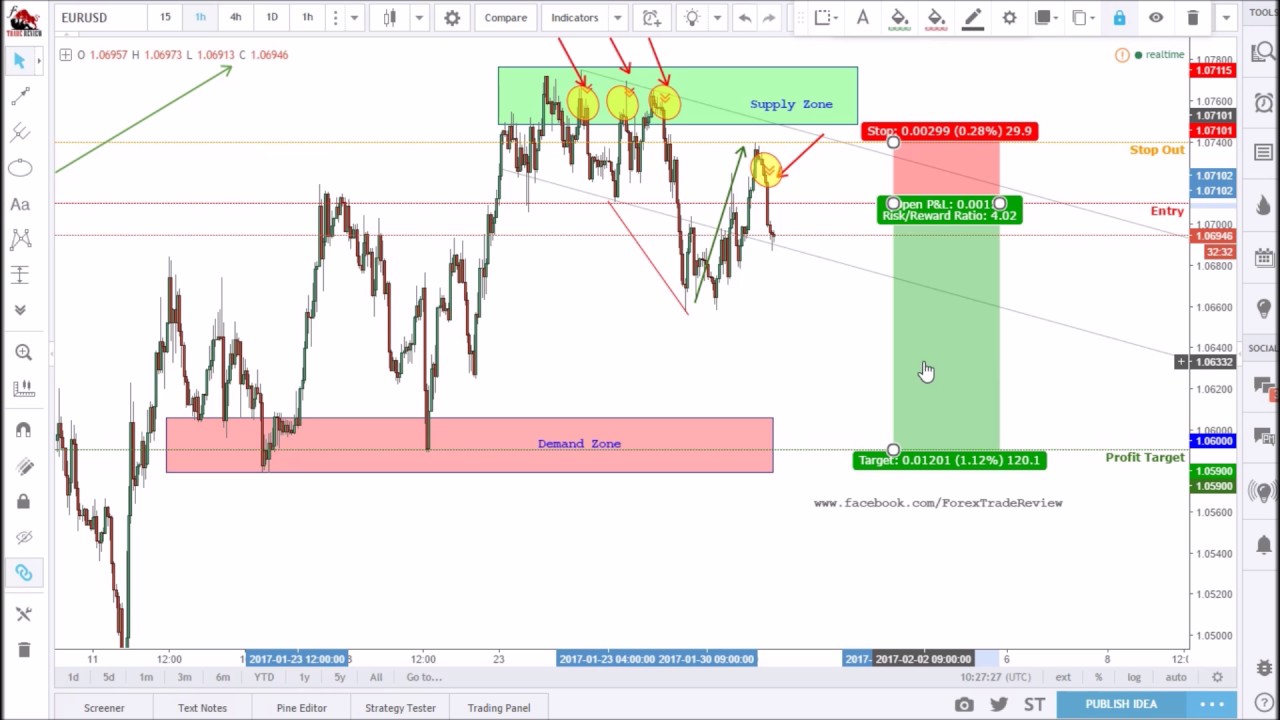 Supply and demand zones are one of the core strategies I use to trade the Forex market.

Over the course of this article I’m going to walk you through the 4 rules you need to help make your supply and demand trading more profitable. 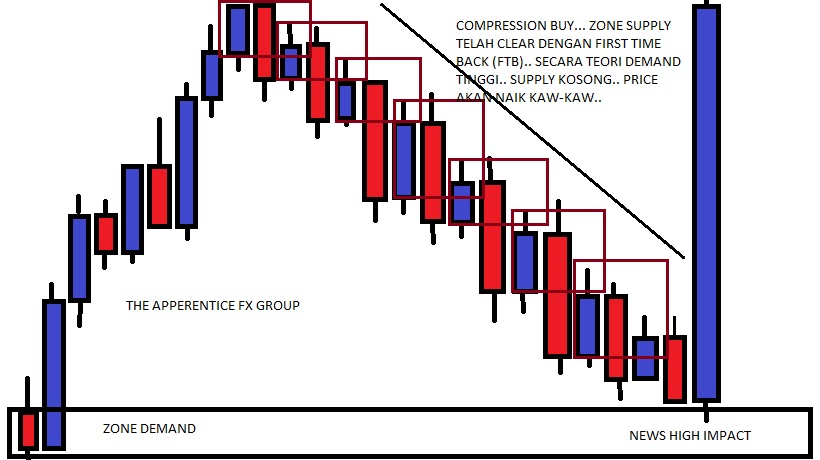 Only Trade In The Direction Of The Most Recent High/Low

Most of the traders who trade supply and demand zones try to predict where a movement will end instead of trading in the direction of the movement itself.

What these traders typically tend to do is mark all the supply or demand zones which the market hasn’t encountered yet and wait for the price to enter these zones before going either long or short. Usually these supply and demand zones will have been created a long time ago which means they don’t have a high chance of causing a reversal anyway ( more on this in a minute )

Whilst the traders wait for the market to hit these old zones which they believe are going to cause a reversal, there are lots of  zones forming in the direction of the current movement which the trader is neglecting to trade because he is so focused on predicting where the movement will reverse.

If the trader just stopped trying to find where the whole market was going to reverse and instead concentrated on taking trades at zones which formed in the direction of the most recent high or low, they would find themselves having far more winning trades.

A new high or low is a signal that the current momentum is to the upside or downside, by trading against this momentum you are unnecessarily putting yourself at risk of losing money because you’re trying to trade against the trend.

The trader would have had the supply zone already marked on his charts before the price made a new high, when the bull move occurred and a new high was made, the trader should have seen it as a signal that the price wants to keep moving higher, instead he places a short trade because he believes the supply zone will cause the market to reverse.

After hitting the supply zone the price only manages to drop a small distance before breaking higher again, making another new high and forming a demand zone in the process.

When the market returns to this demand it causes another up-move, had the trader taken this trade instead of the supply zone trade, its likely he would have made some money because he was trading in the direction of the current momentum as opposed to trading against it.

If you always trade in the direction of the most recent high or low you’re giving yourself the best opportunity possible to have winning trades, reversals are very difficult to predict and usually when the market does reverse there will be another chance for you to get in right at the beginning of the reversal anyway, so there’s no need for you to try to anticipate when a reversal will occur, just wait for it to happen and then trade in the new market direction.

Do Not Trade Zones Which Were Created A Long Time Ago

One of the main rules Sam Sedien implements in his trading of supply and demand zones is the idea that zones which formed a long time ago have a higher chance of working out successfully than zones which were created recently.

Like I explained in my supply and demand trading article this assumption is incorrect and makes no sense with how the banks operate in the market.

Sam and other supply and demand teaches say old zones work because they have seen the price reverse at old zones before, but the reality is there only saying the old zones cause a reversal because there is no other reason they can point to as to why the reversal occurred.

It kinda comes back to what I was saying in my multiple trading strategies article about how people who use one method will always look at the method as being the sole cause behind all movement in the market.

Sam Sedien teaches people that price moves because of a supply or demand zone being hit, the traders who then trade supply and demand using his teachings think every reversal begins from the market entering a supply or demand zone which is wrong, the only way the market will reverse is if the bank traders take profits off existing positions or place trades in the opposite direction to which the price is currently moving.

Both of these decisions are made based on how many orders are currently in the market, it has nothing to do with supply and demand zones it just happens to be that on some occasions the banks end up taking profits or placing trades at the same point where an old supply or demand zone formed.

This is why people think old supply and demand zones work, they see the price reverse at one of these old zones and think the zone itself is what has caused the reversal, not bank traders placing trades or taking profits which is the real reason for why the price has reversed.

Since I mainly trade the 1 hour chart I consider any supply or demand zones which formed over a week ago to be old, if the market returns to one of these zones I wont trade them nor will I expect them to cause a reversal, if the price does end up reversing at one of these zones I know it’s not the zone itself which has caused the reversal and is probably banks placing trades or taking profits.

The Size Of The Move Away Doesn’t Matter

Another rule which Sam and other supply and demand traders use is the idea that the bigger the move away from a zone, the better chance the zone has of giving you a profitable trade.

His rational for this rule being valid is, the bigger the move away from a zone the more out of balance the levels of supply and demand are said to be, therefore the higher the chance the price has of reversing when it comes back to the zone.

Since the supply zone above has a strong drop away Sam would say it has a better chance of causing a reversal because there is more supply than there is demand, in other words, since the move down from this supply is big it means there are more sellers than buyers.

So firstly saying the strength of the move away has an influence on whether the zone will work out because there are more buyers/seller than buyers/sellers is incorrect and secondly the size of the candles which construct the move away from the zone do not show if the orders which came into the market and caused the price to move are big or small.

If a move away from a demand zone had three really big bullish large range candles it doesn’t mean the buy orders which caused that movement to occur were bigger than a zone which only had three small bullish candles, how many buy orders needed to cause the price to move up, depends entirely on the amount of sell orders coming into the market.

You can see this by looking at what the market was doing before the demand zones were created.

Before the first zone formed the price was dropping rapidly, at the time it would have looked like the market was going to continue moving lower so lots of traders will have been placing sell trades expecting the price to keep falling.

Before the second demand zone formed the price was also dropping, but it was not declining to the same extent to what we see with the first zone.

You can get more detail on seeing where the zone has formed in relation to the rest of the trend if you read my supply and demand tradingarticle.

Make Sure The Market Returns To The Zone Quickly

Whereas Sam Seiden says the longer the market has been away from the zone the better chance it has of giving you a successful trade, I say the quicker the price returns to the supply or demand zone the more likely you are to end up with a profitable trade.

If the banks have trades left which they were not able to place when the price moved up or down forming the supply or demand zone in the first place, they’ll take some profits off their trades and force the market back into the region where their trades were placed ( i.e a supply or demand area ) so they can get the remainder of their positions entered into the market.

The X’s above show the points where the banks have been placing buy trades.

When the price shoots up creating the demand zone, the banks still have a few more buy trades left which they need to get placed.

In order to get the price to drop back into the zone the banks must take a little bit of profit off the buy trades they have been placing, when the banks take profits the current buy orders are consumed and the price begins to drop.

When the price falls into the region where they have placed their first buy trades they use the new sell orders which have come into the market from the traders on the lower time-frames placing sell trades because of the drop, to get the rest of their buy trades entered into the market.

This whole event happens within three hours of the demand zones creation, if the price continued to rise after the demand zone formed then its unlikely the banks would have made the market return to the zone because all of their trades would have been placed.

The rule which I give in my supply and demand trading article is if the market has not managed to return to any zone found on the 1 hour chart or below within 24 hours of its creation it means the banks are probably not going to use the supply or demand zone to get more trades placed.

Don’t look to predict where the up-move will end using supply zones, just follow the most recent high or low

The hope the 4 rules I have given you today will help you trade supply and demand zones more effectively, the rules these gurus and teaches give out always sound good to naive traders but rarely make any sense with how the market actually works and it’s only through a lot of study can you reveal the right rules which will benefit your trading.

Thanks for reading, if you have any question about the rules discussed in today’s article please leave them in the comment section.