Any damage will transform the target back into its normal form.

Only one target can be polymorphed at a time. Only works on Beasts, Humanoids and Critters.

Polymorph is a mage spell that transforms the enemy into a critter, removing it from combat.

It is the mage's primary crowd control spell, allowing them or their party to focus their efforts elsewhere while the polymorphed target wanders harmlessly for a period of time. Any damage taken by the target will cancel the effect, and as a magical debuff it can be dispelled.

Polymorph will affect mobs up to the advertised duration, but players will break out of the transformation after no more than 8 seconds.

The careful use of Polymorph can be tremendously effective in combat against elites.

Typically, a mage will use Polymorph before combat, allowing the group to focus on the remaining targets. Because Polymorph heals the target, it is much more effective to use it on targets that has not yet taken damage.

Polymorph can be reapplied, refreshing the duration, at any time in combat, so it is helpful to always re-sheep before the effect expires; it is more difficult to re-sheep a mob that is running loose (and likely beating on you) than one that is already under control.

In group situations, the party leader can use a Raid Target Icon to designate which target to polymorph.

This can allow the mage to keep track of where the sheep is during the fight, and can easily tell if the Polymorph effect is broken. The most common marker for sheep is the Moon. It is also possible for higher-level groups with more that one mage to further coordinate by assigning a specific Polymorph style to a specific mage.

Wandering sheep can aggro nearby groups when it breaks near them.

[Frostbolt] to pull and slow the movement speed of the target to a more favorable location before sheeping will help minimize the chances of this happening. It is also helpful to use

[Frost Nova] to freeze an enemy in place to prevent it from hitting you, then Polymorph it.

By using a simple macro you can stop casting a spell before it is finished and re-sheep as needed.

This allows the mage to be much more responsive if a target breaks early.

Use the Focus target to keep track of your sheep while killing other targets. In the default Blizzard UI, the focus target shows as a separate frame. The focus target can be set and regained with macros as well, which helps when it is necessary to re-sheep a target.

Polymorph can be a very useful tool in PvP, though it does have some limitations over PvE use.

Specifically, the following limitations apply when Polymorphing a hostile player:

While Polymorph does regenerate the target's health quickly, it doesn't affect mana in any way.

In PvP situations mages can Polymorph then bandage and/or use

Polymorphing a warrior using a shield and

[Spell Reflection] can also be extremely useful if timed correctly. Rather than have a damaging spell reflected back, you can essentially sheep yourself and benefit from the healing effect. This tactic should not, however, be used in arenas.

It is not particularly effective against druids, due to their immunity in shapeshifted forms and ability to shapeshift and break the spell instantly. The best it can do against a druid is interrupt his heal in progress or force him to spend mana to break it.

A variety of alternate animal forms are available through various means, and provide the mage with an additional, separate Polymorph spell.

The mage can then choose which Polymorph spell to cast on a target. However, these spells are, for the purposes of all game mechanics, one and the same; the mage can have only one target polymorphed at a time, regardless of the variant of the spell used.

Perhaps the most fearsome of the Mage spells, Polymorph alters the physical form of its target.

This metamorphosis changes man to beast, forever warping both mind and body. This sorcery wholly transforms the victim into a creature of the wilds, thus losing their reasoning - making commands for direction or battle impossible. Although there is no counter for this spell, possessing a greater stamina does decrease the possibility of this enchantment taking effect.[2]

[Portal] usage is to never send a polymorphed subject through a portal, or polymorph someone halfway through one, as "this has yet to not cause an explosion."[3]

This human mage's Polymorph transforms a Tauren into a sheep. 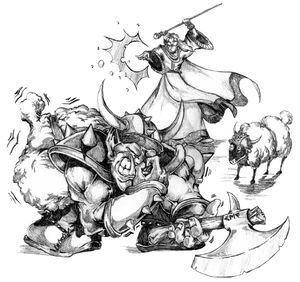